Unlock the power of Ad Customizers

Ad customizers can be extremely useful when running campaigns for multiple geos, or for running similar ad copy for multiple categories.  When running a massive account with thousands of ads, ad customizers allow you to personalize a general ad template without having to build out individual ads for every single ad group.

What are ad customizers

They allow you the ability to dynamically change out copy to match the corresponding element in a feed in your business data section of Google Ads.  You can specify what your copy should be based on campaign, ad group, and even geo.

Ad customizers are parameters that get replaced by dynamic text that is held in the product feed.  You can even include a default value so that there even if your feed is not fully up to date.  The general format in the ad copy looks like the following:

For instance, if you had a campaign dedicated to selling shoes with ad groups for multiple colors like green, red, and black, you could have a headline that said:

This headline would reference a file named “shoes” and search for the column “color” and pull the value that matches your ad group.  If it can’t find a match it will insert “Colorful”

You can target your ad customizers based on campaign, ad group, keyword or even by geo.

2. Decide which elements you want to apply in your ads, and create your document your ad document. You can select to target based on keywords, ad groups or campaigns

3. Then go to Tools & Settings 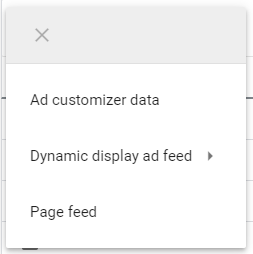 6. Name and upload your document. I suggest naming your document something short so that it’s hard to misspell

This is super confusing, so read the next part before you give up here.

Now imagine that red sneakers are $50, black sneakers are $40, and blue sneakers are $45 and then you have slipper ads in there too.  Normally you’d have to write a bunch of different ads to highlight their different pricing.  With ad customizers, you can have one ad that works for all options.

Better yet, if the pricing changes regularly you just manage the data doc rather than having to change all your ads and fragment your historical data.

First you’d need to set up a feed that you would upload to Google Ads Business Data that has the following columns: 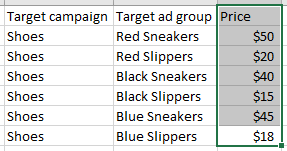 In this example you would create a headline that said:

If you have an exact match keyword in the Shoes campaign and Red Sneakers ad group, then the ad would read “Buy Shoes For $50” and it would dynamically add the value from the price column.

If it didn’t match anything in your doc it would return “Buy Shoes For Cheap” because “Cheap” is the default value.

Customizing each geo to show the proper local city in the copy is amazing, but when you get above a certain amount of cities it gets to be unmanageable.

Imagine having to manually create ads for each geo for a massive account covering hundreds of cities in multiple countries, you would have to create separate campaigns for each geo and then customize all ads within those campaigns… gross.

Well, good news! They don’t have to be that way, as long as you use geo-based ad customizers.

Think about the shoe based eCommerce example mentioned above in terms of setup, but instead of basing on keywords, ad groups or campaigns you can base it on Target Location.

Start by looking into this list from Google for the geo granularity you can target.

If you want to make an ad with copy like “Hire a Plumber in [CityName]” but you’re advertising in 30 different locations, this is how you can accomplish that without hating your life.  To accomplish this you will create an ad that has something that looks like this:

In this example it’s referencing your product feed named “ProductFeed” (you can 100% name it something that makes more sense) and returning the value that matches for the column “CityName”.  The default value with return “Your City”.

In Excel, organize your target locations in one column and the modified value and create that as a separate column.

Hello Click-Through-Readers! Have you seen the updates to Instagram? My DMs are much more...

Today we’re going to tackle one of the fundamental tasks in running AdWords accounts: building...

Hello Click-Through-Readers! We are pleased to announce that...there are some big announcements in...