Hello Click-Through Readers! This week we are reading about Google enabling Target ROAS bidding for app campaigns, as well as digging deeper into the intent behind that Facebook iOS14.5 prompt. We will also cover new Instant Match Rates for Customer Match lists in Google, and the Twitter rebrand.

Google announced on April 22nd that you are now able to use Target ROAS bidding for app campaigns to help capture quality app users and generate more revenue. This feature gives you the ability to optimize for in-app actions from new users and target a return on ad spend. To utilize this feature, you'll need to set up conversion events within Google Ads or using Firebase.

In response to Apple’s roll out of their controversial data tracking prompts with iOS 14.5, Facebook added a new piece to their own prompt in an effort to convince users to opt in to tracking in Apple’s prompt. This prompt explains to users why they should opt in to tracking, and what the consequences could be if they opt out. Their main arguments are so users continue to see relevant and personalized ads based on things they’re interested in, and to support businesses that rely on advertising to reach their customers. The new piece to this, which almost comes as a threat, is to “Help keep Facebook/Instagram free of charge.” 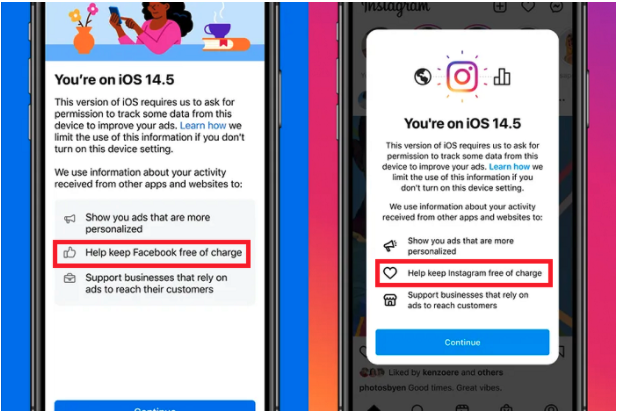 It seems like more of a scare tactic and last ditch effort to try to convince users to allow tracking from Facebook, but it will be interesting to see if this addition has any effect with the number of users who actually opt in to allow tracking.

If you want to keep tabs on what the opt-in rates are looking like, Flurry Analytics provides aggregated insights that are updated daily.

Google will now immediately reveal an estimated match rate for Customer Match lists uploaded to the platform. Having this data available can help contextualize performance expectations and alert advertisers to any issues with the data prior to running ads to them. With recent and upcoming changes to third-party cookies, this will be extremely helpful to advertisers as they use first-party data for retargeting.

To improve match rates, provide as much information about the users uploaded and properly format the data.

Google notes: “Advertisers who uploaded two types of customer information saw an average list size increase of 28%, and with three types they saw an increase of 35%.”

It’s also important to keep lists updated, and may appear as a recommendation in accounts.

Google’s internal data has cited an increase by an average of 17% after they’ve been updated.

Twitter announced recently that it was rolling out a rebranded and simplified advertising offering. Historically, Twitter offered 22 different ad format names and has dwindled this down to 5. The new categories are:

Hello Click Through Readers! How is everyone doing? Did you remember that Monday is a holiday?...

Hello Click-Through-Readers! How many of you had to console your pre-teen/teenagers this...

Happy September Click-Through-Readers! We have a long weekend coming up, remember to move your...