How to Run a Google Ads Experiment

Before making a big change to a Google Ads campaign, it might be a better idea to set it up as an experiment. This allows us to see how the change actually impacts performance in a true test environment.

If you want to test a different landing page, an experiment is a good way to set it up if you can’t conduct it on the landing page itself.

Testing two different bidding strategies is another good example of when an experiment can come in handy.

How to Set up An Experiment

The first step in setting up a new experiment is creating a campaign draft.

Go to the Drafts & experiments section from the left hand menu.

The new draft will give you a copy of the original campaign. This is where you’ll make the changes to the campaign you want to test.

Once you’re happy with the updated draft, go to APPLY at the top of the draft settings. Select the option to run an experiment. 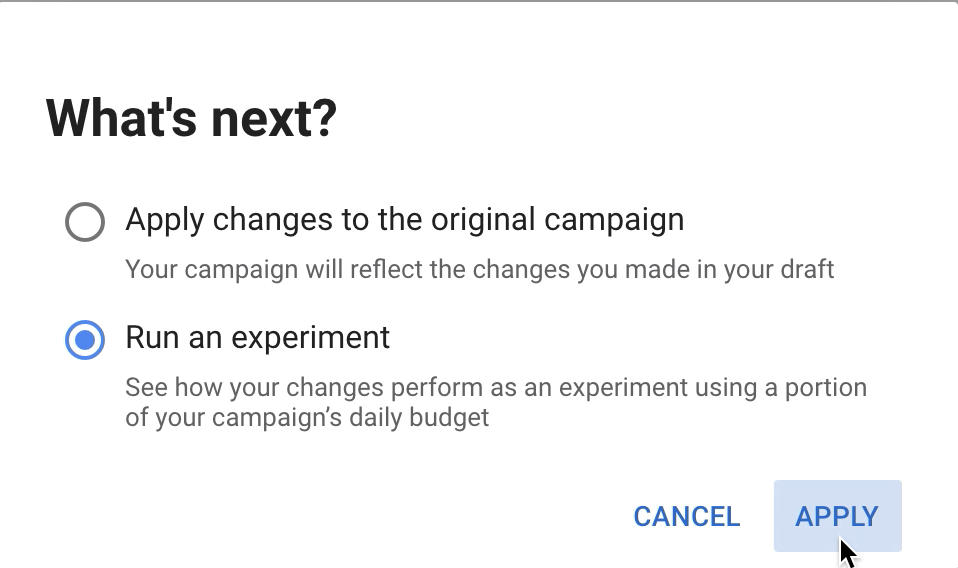 Next you’ll choose the experiment settings.

Name: Use the same name for the experiment as you did for the draft name.

Description: Handy to use to put in more details of the test that’s running.

Start Date: You can choose anytime in the future for your experiment to start. The earliest it can start is the following day from when it’s set up, as it needs complete days of data and wont start in the middle of a day.

End Date: I like to not set an end date. This gives us more flexibility to stop the campaign once we have enough data, rather than a set period of time. Once a campaign ends, you can’t restart it.

Experiment Split Options: Under advanced options, you have the choice of selecting search-based or cookie-based. Cookie-based is the default. That means Google will keep the traffic separated based on cookie data. If someone does a search and is served an experiment ad, if that person searches again, they will stay within the experiment group. 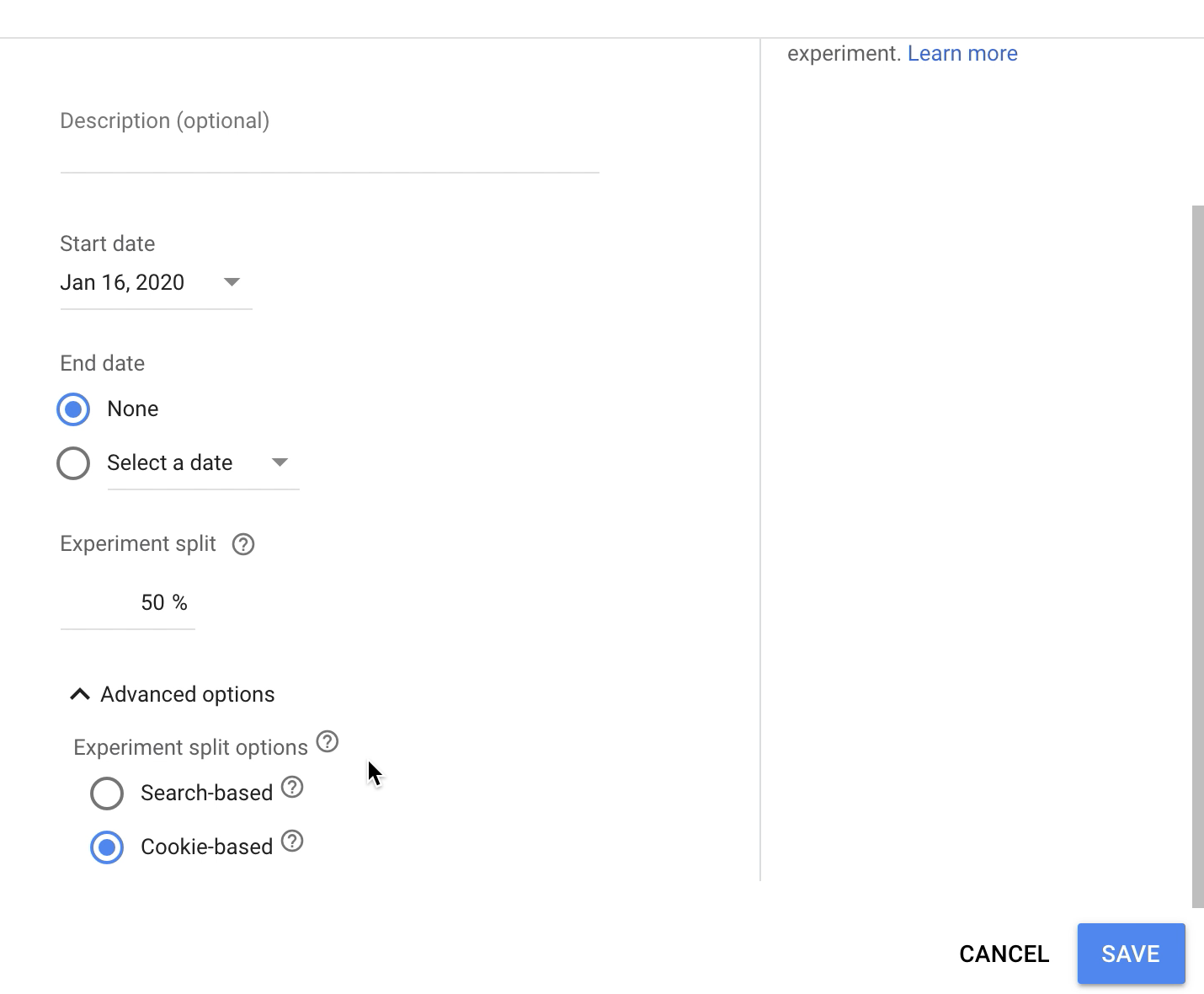 Important Things to Remember When Running an Experiment

It’s important to note, that once you have an experiment live, there will be two separate campaigns. They will both share the same budget. However, if you make any changes to one of the campaigns, it will not automatically be applied to the other.

So if you have an experiment running, and decide that you need to pause a keyword, ad group, or ad, you must also make the same change in the experiment campaign as well. Failing to do so could throw off the results of your experiment.

It’s also best to refrain from making changes to experiments as much as possible. Make sure you can commit to running the experiment for enough time without making any huge changes.

Deciding on The Next Step

Google will let you know with a blue asterisk if the results are statistically significant or not. Make sure you know what your KPI is that you’re using to determine success. You might be looking at which version produces the better CPA, conversion volume, or CTR. Whatever it is, that is the metric you should be paying attention to when you decide on a winner.

On the other hand, after enough time has passed, you might find yourself with no clear winner. If that’s the case, you might decide to end the experiment and continue on with the original campaign, or implement the test variation.

When you’re ready to end the experiment, you have two choices. 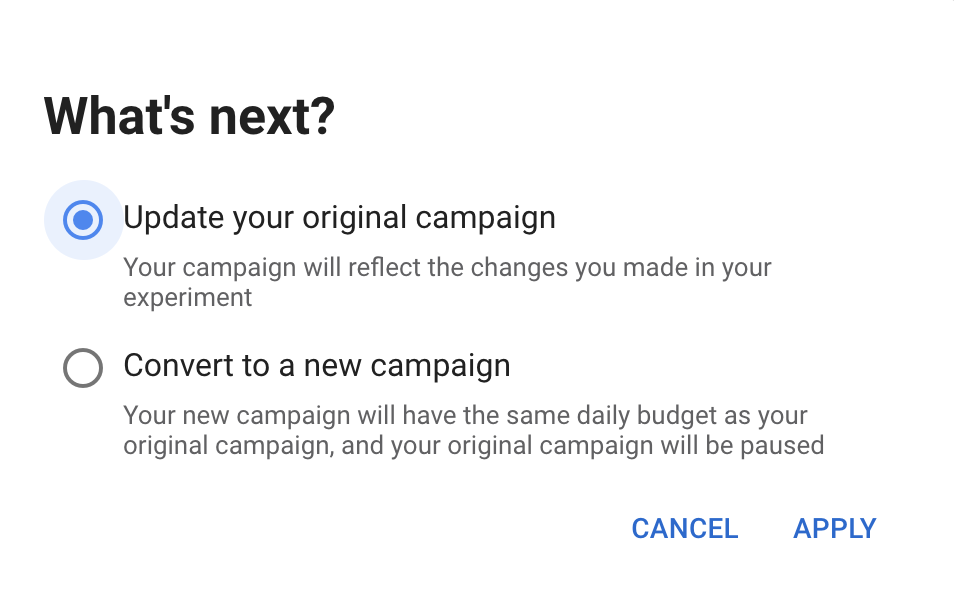 Remember, in both of these options, you will not be able to restart the experiment once it’s done.

Experiments in Google Ads are a great way to test and get accurate data. If you need help with experiments or general account management, reach out to us!

I took vacation, but the world kept turning. Weird.

Chat may soon become an essential...