Hey, Click Through Readers! Welcome back to another week of industry news and trends.

This week was filled with several announcements from Google, and we have all the information you need to know!

Google is experiencing outages across multiple platforms this week. Make sure you know if you’re affected and what to do until the problem resolves.

New features are rolling out for Google Performance Max campaigns. Discover how you can add these tools to your ads arsenal.

If you create any kind of political ads on Google or YouTube, you’ll want to update yourself on the latest policy updates announced this week.

Let’s get into it!

For the second time in a week, Google is experiencing reporting outages across multiple platforms. Platforms affected include Google Ads, Google Analytics, Google Ad Manager, Search Ads 360, Display and Video 360, Campaign Manager 360 and Google AdSense. Incorrectly reported Ad Spend is part of this outage. Since ads continue to serve without clear visibility into performance (such as spend, conversions, etc.), Google recommends making minimal optimizations and adjustments until the issue is resolved. 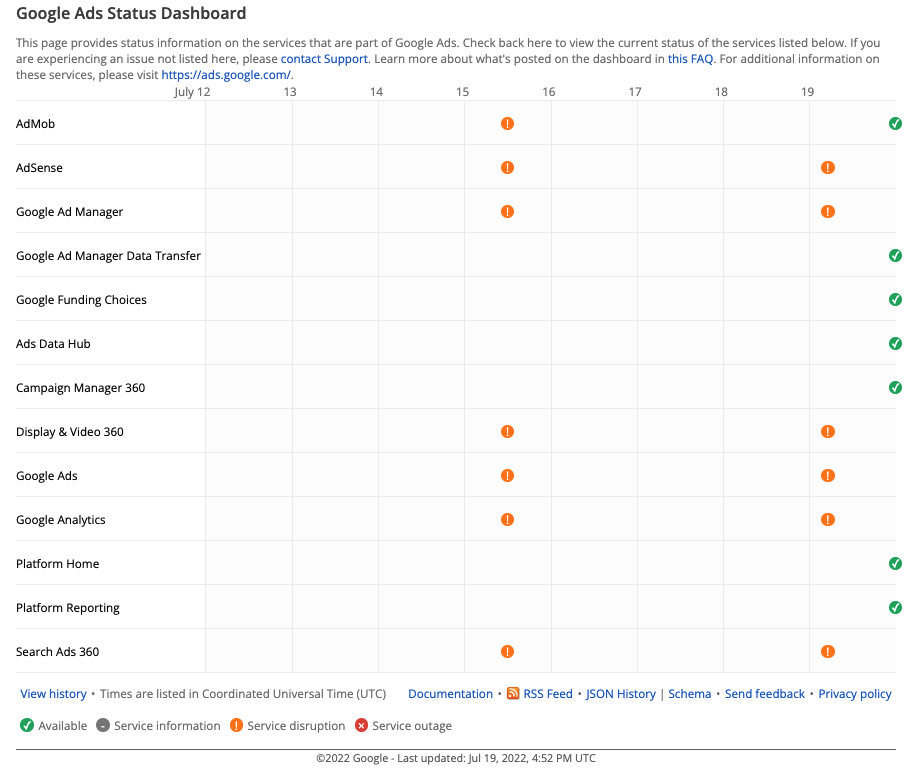 Google announced that Google Ads is rolling out new features for Performance Max campaigns. Advertisers will have the ability to gain new insights and improve results with ideas from the optimization scores that make suggestions as to which assets are performing best. We will be able to get explanations to help us interpret shifts in volume a lot quicker and easier.

Google has also added new advanced location targeting controls while allowing advertisers the ability for data exclusions if there were issues with conversions in the past. Seasonality adjustments are also rolling out for businesses to implement prior to a sale or expected shift in conversion rates. When setting up the campaign, you'll be able to run a diagnostics check, ensuring nothing is wrong with the budgets, billing, or if there are and disapproved ads.

With these new features, advertisers will now be more equipped to analyze data and narrow their targeting to help make more informed decisions to improve ROI. If your account has the assets to utilize performance max campaigns, be sure to add the above feature to your arsenal of tools!

Next month, the Google Ads Political Content Policy will be updated, making it easier for US consumers to identify the origin of political ads. Google is also introducing YouTube Audio ads, which are currently in beta.

YouTube Audio Ads may or may not be available to all advertisers, but those who utilize them for political ads will be required to complete the US Election Ads verification.

Regarding new policy updates: the new policy requires the advertiser to disclose their origin by placing “Paid for by” directly within the ad.

You can read the announcement and new policy here for more information.

A new LinkedIn case study shows how Github, a popular software host, leveraged the LinkedIn platform to reach its audience through a variety of complimentary ad types. From event ads to message ads, here is a look at how they promoted an event and grew their brand.

Github product manager, AJ Jimenez, said, "Each platform has its own culture and uniqueness. And it turns out, there isn't a huge overlap in the audience that consumes our content on LinkedIn versus other platforms.

Event ads produced a 22% registration rate, which was 5.5 times higher than their average 4% conversion rate for the same event. Github attributed over 15% of their event attendees to LinkedIn. What they did afterward was a great example of how to leverage complimentary ad types.

During the three week event, they followed up with attendees using message ads. They reported a 75% open rate on these sponsored messages! In addition to cross-promoting other events and breakout sessions, they built a list of attendees and followed up with them through continued sponsored campaigns.

Hello Click-Through-Readers! This week we are going there with an article about TikTok...

Happy Halloween Click-Through-Readers! There are no tricks, only treats, in this news roundup....

I love the start of a new year because everyone gets to hit that metaphorical reset button on their...